Public warning is one of the most important civil protection measures. It is performed by warning signals through the sirens. Most often supplement informations are provided in the transmitted mass media (radio, television, reporting from municipalities / town radio).

The sound of sirens always means some risk. It points out that there may be or have been an emergency that threatens the lives and health of citizens, property and the environment (according to the tone signal and duration of the check, which warns you before). Every citizen in this situation takes place according to their abilities, knowledge, skills and follow the instructions issued by the competent authorities. It’s necessary to hide in suitable premises, or leave the danger zone.

If you hear a warning signal

Warning signals GENERAL THREAT, WATER THREAT and END OF THREAT will be followed by the spoken informations through mass media (place, time, type of threat, the size of the compromised area, the guidelines for action inhabitants).

Signal GENERAL THREAT is used also in case of air attack of the national territory during a state of war and during the war. Verbal information in that case contains the definition of territory for which it is declared and a term AIR ALARM. 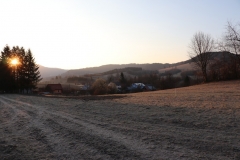